The global pandemic of the actualization of domestic violence has its roots in the United States, where the problem of male violence against women is seriously engaged. Since 1991, The Center for Women’s Global Leadership (CWGL) has been organizing the 16 Days of Activism against Gender-Based Violence campaign, which runs from November 25th, International Day for the Elimination of Violence against Women, to December 16th. The essence of the action is to support the orange solidarity symbol as a signal of an immediate end to violence against women and girls. In this vein, it is worth asking the question, where does the violence begin?

Movies about violence in Hollywood are quite a favorite genre. The accessibility and widespread distribution of Hollywood films covers the entire world audience, which justifies its choice as an object of study. The very problem of domestic violence against partners is perceived acutely by the audience, it does not matter if the violence is real or is it on the screen, the fact of violence has taken place: violence always remains violence.

The specificity of domestic violence is related to the order of psychoanalytic or psychological deviations. Considering the issue from the point of view of psychoanalysis, it is possible to apply two concepts to domestic violence: sadism and masochism. The German psychiatrist R. von Kraft-Ebbing first introduced these terms in 1886. As he squeaks, R. Kraft-Ebbing: “Sadism is a sensation of sexual pleasure, reaching an orgasm at the sight of and when experiencing punishments and other cruelties committed on a person or even an animal.” In turn, masochism is “the orientation of the sex drive to representations that have in their content subordination to a person of a different sex, and to experience his violent actions in relation to himself”. As we can see, these two concepts, being types of perversion, are directly related to the principle of pleasure. Thus, psychoanalysis can be considered an appropriate tool for the analysis of this social practice and its representation.

In this paper, the features of the representation of domestic violence in 2017 Hollywood cinema will be revealed using the psychoanalytic methodology through the consideration of two cases of Hollywood cinema (“Big Little Lies”, “I, Tonya”).

“Hollywood cinema” and the visualization of violence

Over the course of a century, “Hollywood Cinema” has been recognized as a knowingly authoritative source of high-quality products, which put the common noun “Hollywood” as an American cinema. Cinema is a special social phenomenon that attracts the attention of “masochists” to immersion in the structure of the film, enjoying the visual pleasure of a hyperbolic world that reflects itself. The viewer is more likely to even see himself in the film, making violence brighter, plunging into the paradigm of object-subject relations. The very representation of violence is seen as a symptom of a deep neurosis, in which a person tries to satisfy his lack of the “Other”.

Violence on the screen is a broadcast of cultural codes. The viewer is a passive object, and the cultural form of cinema occupies the position of the dominant subject, delivering visual pleasure to the viewer himself of a special kind. Visual violence is carried out imperceptibly, the viewer does not allow the thought that its functioning is due to the movie camera.

The mini-series from the American television network HBO “Big Little Lies” is a story about the complex inner life of privileged women shrouded in the mystery of murder in a rich coastal city. The storylines are intertwined, showing absolutely diverse characters, their stories and problems, and also opens the curtain of the sociocultural phenomenon of domestic violence. This television show is about middle-income families who are investigating the murder of a member of their community.

The character Nicole Kidman, who plays Celeste, reveals herself as a successful housewife woman who quit her career as a successful lawyer to raise two wonderful children. Perry, the character of Alexander Skaarsgard, who plays the husband of Celeste (Nicole Kidman), is apparently an extraordinarily charismatic and attractive man who psychologically and physically abuses his wife, in which it most often comes to sexual intercourse. It seems contradictory that in private with his wife the image does not coincide with reality.

The “Big Little Lies” reflects the many nuances of domestic violence that unfold between the victim and the rapist. In this vein, we should turn to Eleanor Walker, describing the cyclical nature of violence. She [cyclicality] and occurs in this series as three main phases: increasing tension, violence itself, and the phase of the “honeymoon”. Throughout the story, you can see that the heroine is so much afraid of her husband’s fury that she provokes him to violence herself because she understands: the longer the wait, the stronger the outbreak of anger and aggression. Thus, she agrees to such an order of development of relations, directly approaching the stage of the “honeymoon”, in which love inspires the couple again.

Obviously, the question begs what makes Celeste stay with her husband. From a psychoanalytic perspective, Perry, Celeste’s husband, is subordinate to the act of achieving the pleasure principle, which works along with the principle of repetition. He receives satisfaction and sincere pleasure from owning a wife not only as a spiritual partner but also physically, as a full-fledged sexual partner. He experiences a “psychologically painful” sensation from the thought that he is capable of losing his beloved object of desire.

Based on the gradation of a sadist and a masochist, a special duality of understanding relationships arises. Aggressive sexual intercourse after a scene of violence refers us to the concept of perversion. Sexual perversion can be traced in this vein in both participants in the violence. Perry, as a sadist, hurts his wife, being a brutal aggressor. Celeste, as a victim of domestic violence, “suffers” such attacks, not opposing subsequent sexual satisfaction. From the point of view of two approaches to understanding sadomasochistic relations, it can be assumed that the object-subject relations of a sadist and a masochist are based on mutual satisfaction of each other’s needs.

Another picture that we will analyze is called “I, Tonya” (2017) directed by Craig Gillespie. An artistic and biographical film tells the story of figure skating legend Tone Harding, her career, life path, encompassing multiple scenes of domestic violence, which are shown in satirical form. This film contains the possibility of a diverse understanding of the plot and history due to the fact that according to the director’s idea, the picture is a feature film.

Throughout the tape, we observe the formation of the character of Tony Harding (Margot Robbie), which subsequently explains the model of her behavior. The narration is conducted from several persons at once, which helps to obtain an objective point of view regarding the behavior of the characters.

The heroine Margot is the “old-fashioned model of a woman”, which embodies the character and skill of a “real man”: the girl is versed in technology, weapons, hunting, and to a minimum degree shows femininity. She grows up with her mother, who subjected the girl to psychological and physical domestic violence, doing all kinds of rotting and insulting the child, because she believes that Tonin’s provoked anger is the best motivator for success in figure skating – Tony’s only comfort and love. 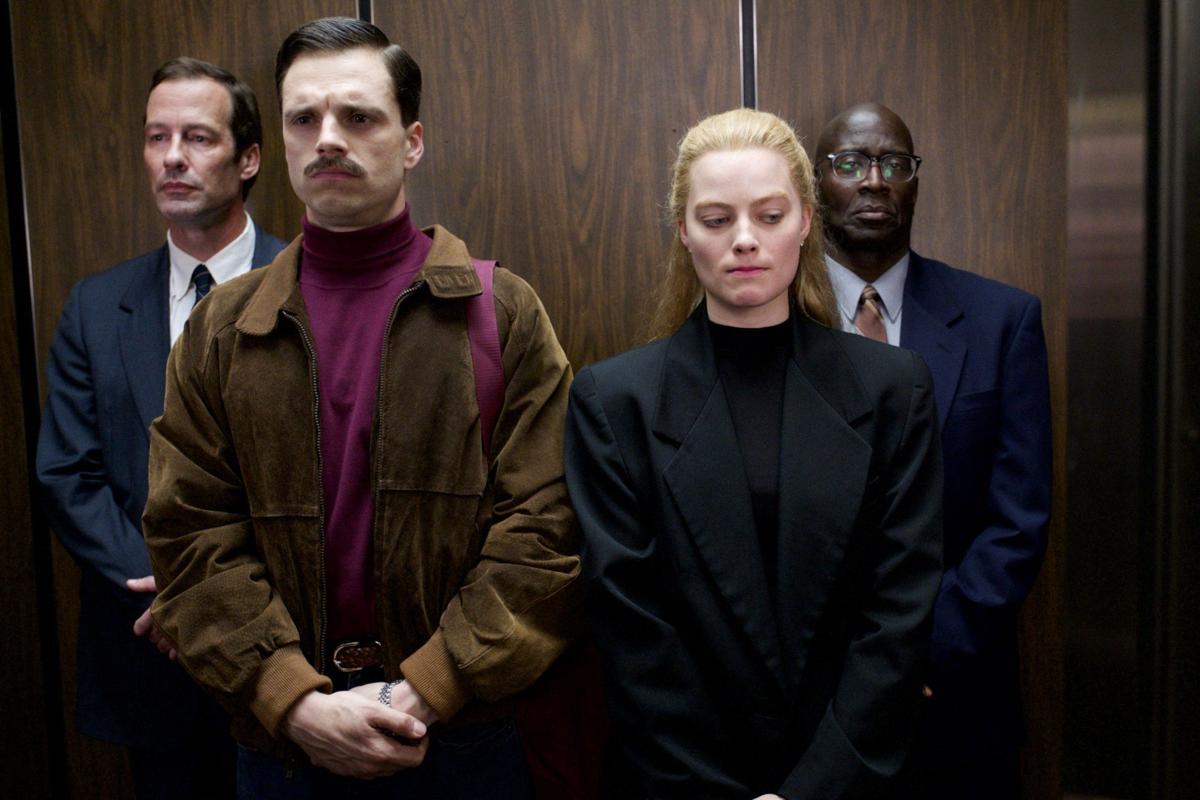 Jeff (Sebastian Stan) believes that he always had sincere feelings for his wife, because, according to him, he wanted to take care of her and protect her. However, it seemed to him, after Tonya became a famous skater, her needs and requirements changed, which, in his understanding, was reflected in their relationship, because the girl with new needs needed a “new” Jeff. Feeling a sense of self-worthlessness, her husband began to beat “for no reason.” Perhaps, looking from a psychoanalytic perspective, in this way he tried to prove that he was as strong as she was.

After numerous scenes of beating, the “honeymoon” stage begins, to which Tonya responds in a voiceover: “He constantly called. He talked about love, asked to return. I wanted to be loved. And she hoped that everything would work out. ” The desire for love in Tone activated a masochistic model of behavior, which was ready to accept the blows of her husband. Having in her head a behavior model of “beating, it means she loves”, the girl reciprocated the attacks of her husband, responding to him to the same extent with domestic violence.

The representation of domestic violence and the ambivalence of taking pleasure is largely due to the work of the human mental apparatus, according to psychoanalytic logic. The mechanism of operation of this apparatus constructs a subject-object paradigm, where one person is a subject with an acute desire to possess an object – possessing the “other” as a thing that experiences a specific acute shortage and attraction. Domestic violence is caused by many factors: social, psychological, economic. The combination of these factors suppresses the human psyche, thereby activating two possible “roles” in a person: either the order of aggression and cruelty, or contributes to the process of revictimization.

Based on the substantiation of the concepts of “victim” and “rapist”, the main motives were identified on the basis of which domestic violence can be carried out. In this regard, on the examples of two products of the “Hollywood” industry – the mini-series “Big Little Lies” and “I ,Tonya”, we identified the ability of psychoanalytic concepts to work in cinema. To all of the above, we have identified the possibility of enjoying domestic violence in sadistic-masahistic relations.

Violence is in the social continuum, representing a wide problem field. After sexual violence in Hollywood, there was a need among people to promote the so-called #MeToo movies, “Hollywood” films, which provided an opportunity to look at different aspects of domestic violence in marriage. Over the years, there has been no radical change in Hollywood cinema, which made viewers wonder if we would see something new. The film ” I , Tonya ” departed from the usual representation of domestic violence, as, for example, in the classic films about which D. Shoos wrote. According to the director of the film, previous Hollywood films unsuccessfully showed domestic violence. For example, in “In Bed with the Enemy” (directed by Joseph Rubin, 1991), he is skeptical of the actors’ play, the unrealistic dialogue, and the “mocking” attitude of the female victim, which completely detracts from her significance. It is absolutely true that the irony of the picture shows the normalization of domestic violence, but for such a reception there is a purpose – to show the attitude of Tony Harding herself to her life and fate.

In both of our paintings, the image of a man coincides with the portrait of a typical “rapist” of a sadist, while women are a “victim”, a masochist. In view of this, it can be concluded that the specificity of the representation of violence is to use the traditional, psychoanalytically accurately described sadistic-masochistic logic to reveal the characters and the narration itself. The key to cruelty lies in the need to be accepted, loved, and dominant.