IDEAS AND PROJECTS OF THE SHORT MOVIE CLUB

The Short Movie Club is a platform for projects in the field of cinematography.

We live in a world of malls and cinema multiplexes. We see that indie cinema and non-commodity art go to the periphery of public attention. Primitive attractions replace cinematography. The escape audience is alienated behind the big screen. So modern mainstream cinema is part of a manipulating tool that leads to the society of alienation. Thus the tendency is that indie cinema becomes more unreadable for a wide audience. We should understand the context of the filmmaker to understand independent cinema. That is why the Unfiltered Cinema concept implies the physical presence of filmmakers.

Filmmakers shoot millions of movies. And thousands of short film festivals organize screenings all over the world every year. On average, several thousands of films are submitted to a film festival. So various good films can be neglected for whatever reason. Often selecting probability is like winning a lottery. As a result, filmmakers are left with no feedback. It is a paradox that no one can hear you in the age of the Internet! The mainstream culture prefers attractions and casual viewing.

Also, this idea is based on the film selection problem. Perhaps it’s no surprise one person, i.e. programme director at best, or even students of film schools make a preliminary decision to select a movie. Сoncordance of judges or previewers is more seldom thing than the difference of background, tastes. So selection or judging can be one-sided or perfunctory. It is not bad as the programme director has a good taste and aesthetic sensitivity, of course. But we’ve discovered another conception of “unfiltered cinema”. We matched it against “the best of the best” way. This way aids to perceive cinematic idiom without the dictate of art-curators. And we make even a survey to understand the cinematic level of the viewers.

So the Unfiltered Cinema Film Festival tries to avoid “the best of the best” way but it does not ignore it completely, sure. The festival selects fiction, animation, documentary, experimental and virtual reality sections. A jury awards the best film in every section. The festival holds the screenings at cinema theatres, the National Centre for Contemporary Arts, and art-spaces.

Our aim is to gather people in art, to have a dialogue to be happy with smart communication. Cinema is art but not sport. The key point of our project is to establish communication between the filmmaker and the audience.

And we use our ShortsArt Hubble to study unclear sides of the short film creation background. The Short Movie Club provides with cinema research and study of short film context. We are focusing on film festivals, filmmakers, and the audience. You can find surveys, questionaries, calculators. It is an open project. Anybody can take part in.

FILMMAKER MEDIAZONE is the Short Movie Club magazine. The magazine targets filmmakers and the audience of short films. It contents researches, studies, interviews in the world of short films.

The project aims to provide a building of Cinema-van amphibia. A wonderful hand-made mobile cinema-vehicle can visit towns and villages to make miracles! I believe in it…

The platform is seeking for the new amazing projects related to cinema. We are looking for cinema project ideas that are full of horizontal communication and P2P cooperation. It can be a film club, a screening, a film school, a cafe, a cinema theater, a submission platform, educational or cultural programs … and so on and so on. Even it is hard to imagine what can be. Temporary we do not consider ideas of film creating and scripts. Meanwhile, you can use our accelerating page to promote your crowdfunding campaign.
Do you have an idea? We have a plan to support it! 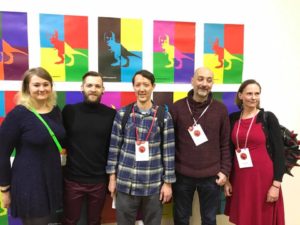